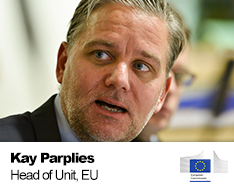 Kay Parplies is Head of Unit in charge of coordination with the EIB Group, EBRD and IFIs at the Directorate-General for Economic and Financial Affairs of the European Commission. Prior to joining DG ECFIN, he was a member of the Chief Economist unit at the European Commission’s Directorate-General for Trade, where he covers trade relations with emerging market economies, trade in services and trade defence instruments. Before joining DG TRADE, he worked as a coordinator responsible for Merger Policy and Scrutiny at DG Competition and as a case officer in the Merger Task Force (MTF), where he worked on Phase II merger investigations in a range of industries, including financial services, consumer goods, air transport, engineering products and medical equipment. Before joining the Commission, Kay worked in the banking industry. He holds a Ph.D. in industrial economics from Cambridge University and a M.Sc. in Economics and Finance from Warwick University.