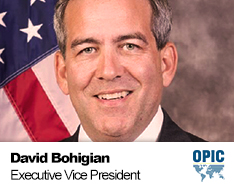 David Bohigian serves as the Executive Vice President of the Overseas Private Investment Corporation after being confirmed by the Senate in August 2017. Bohigian joined OPIC after being the Managing Director of Pluribus Ventures, an advisor to innovative financial services firms and dynamic growth companies.

Bohigian led the Department’s Policy Office as the lead economic and energy advisor to two Secretaries. Before the Commerce Department, Bohigian served as a Managing Director of Idealab. Bohigian joined Idealab after it acquired the venture capital firm he founded, VenCatalyst. Prior to founding VenCatalyst, Bohigian was a partner at Jefferson Partners, a Washington, D.C.-based venture capital firm. Bohigian received his law degree from Washington University in St. Louis and a journalism degree from Washington & Lee.